A few days ago there was a knock at the door and on answering, I found a bag of quinces sitting on the doorstep - a gift from my neighbour, who has a quince tree in their garden.

Resembling large misshapen pears, quinces are relatively rare nowadays and virtually impossible to find in the shops. Their unpopularity is, no doubt, due to the fact that in their raw state the quince is virtually inedible. 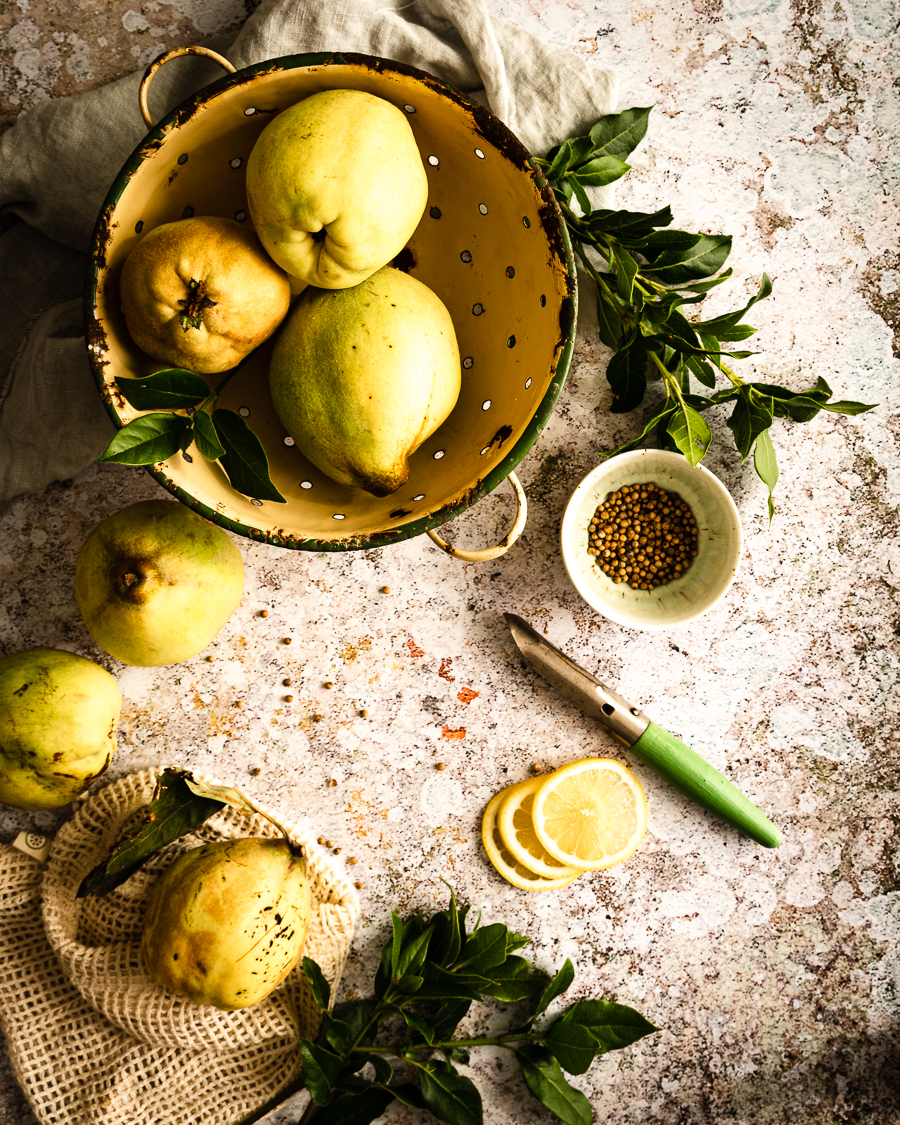 But long, slow, gentle cooking magically transforms this fruit. A poached quince is a delight - soft, fragrant, with a flavour that reminds me of rose Turkish Delight and a beautiful colour that ranges from delicate honey to deepest coral. 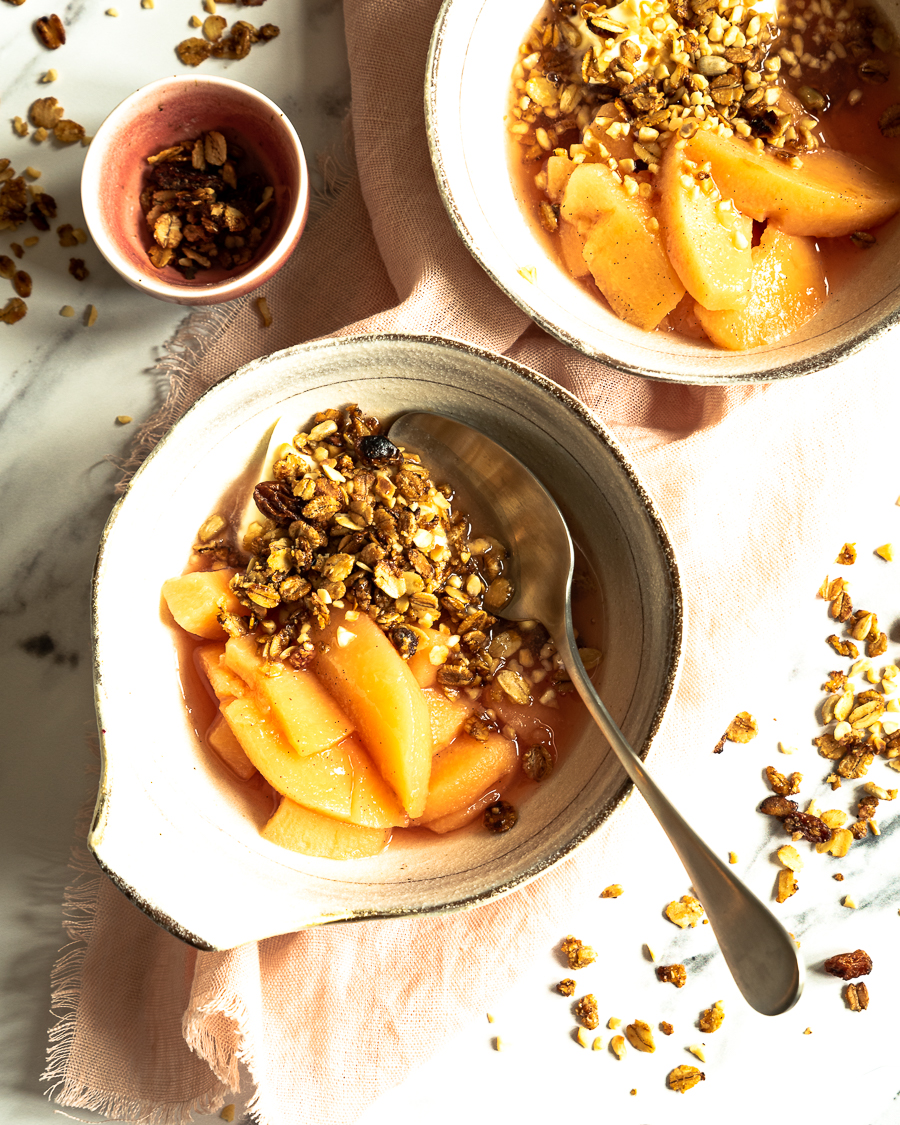 Poached quince with toasted granola and crème fraîche is a treat for breakfast.
The peeled and cored fruit need to be placed in a pan, just covered with water and sweetened to taste with honey or sugar or a mixture of both. Put a lid on and simmer very slowly on the hob for upwards of an hour.
Because of its high levels of pectin, quince are most often made into jams and jellies. In particular, Membrillo or quince cheese, but it also makes a fabulous marmalade.
In fact, although we now think of marmalade as a preserve made with citrus fruit and in particular oranges, the original marmalade was probably made with quince and the name 'marmalade' comes from the Portuguese word 'marmelada' from 'marmelo' meaning quince. There are various stories as to how the quince came to be replaced with oranges in Paddington's favourite food, but one is that, in the 1700s, a Spanish ship carrying Seville oranges was badly damaged in a storm and took refuge in the harbour at Dundee. The captain of the ship sold the oranges off cheaply to a merchant, whose wife turned them into a delicious preserve. So there you have it - a potted ( ahem!) history of marmalade!
Searching through my many cookbooks I found a recipe in my Yeo Valley Great British Farmhouse Cookbook for a marmalade which used both oranges and quince.
. 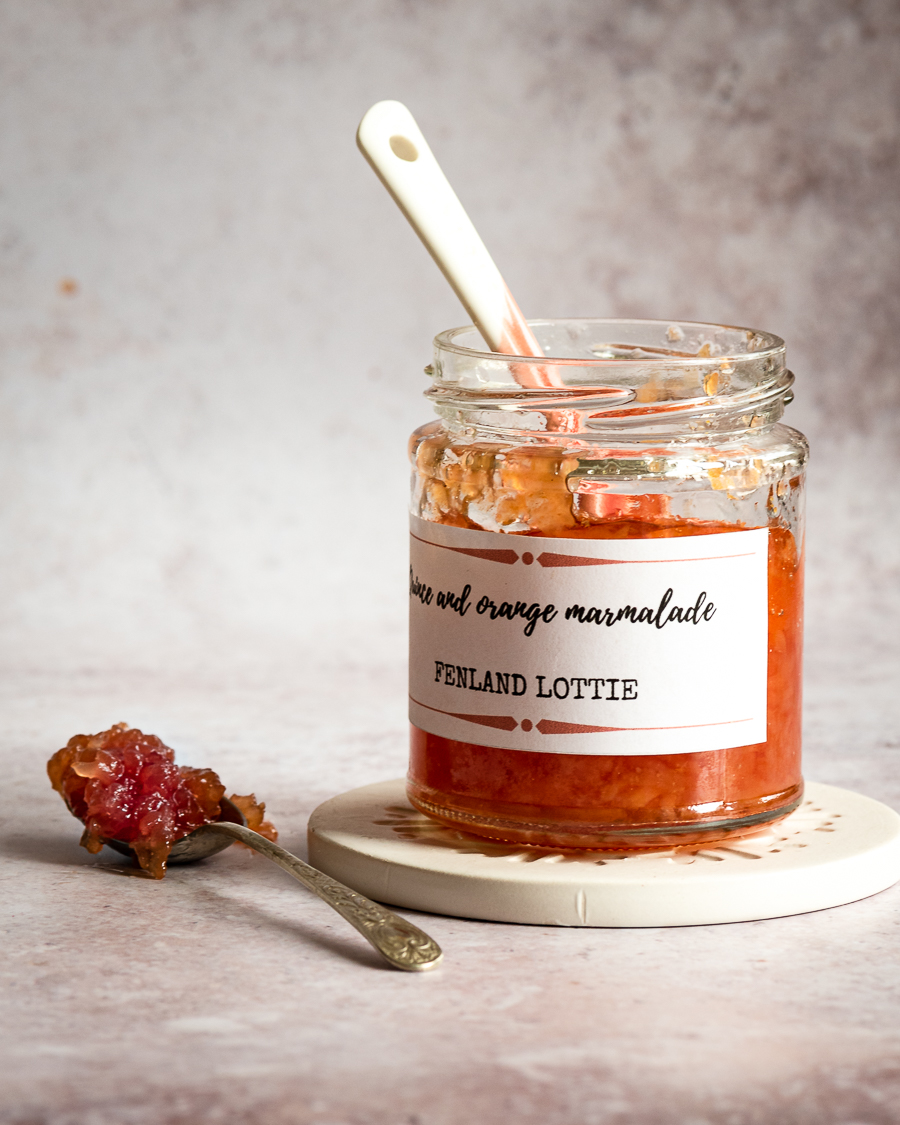 The result was a delicious and vibrantly coloured preserve.
Here is the recipe, should you find yourself with a bag or two of quinces! 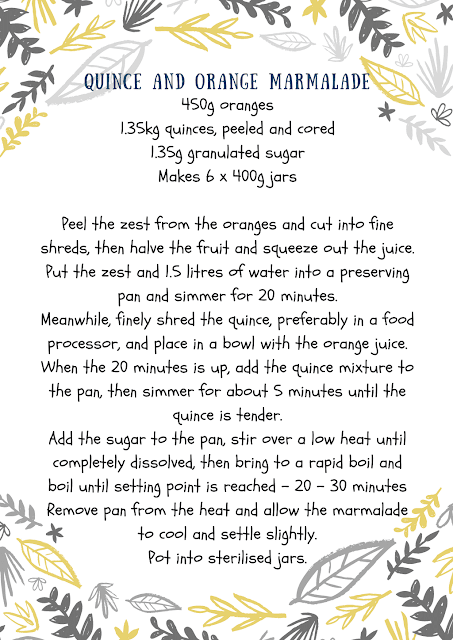 Yeo Valley, as well as being a producer of dairy products, has the most beautiful organic garden ( and wonderful café too) and if you are ever near the Mendips in Somerset it really is worth a visit.
Speak soon
Annie
x